Blog - Latest News
You are here: Home1 / ُStrategic Notes2 / thematic3 / Security4 / The Paradox of Peace and Insecurity in Afghanistan

Last month The Afghan government witnessed an increase in clashes in Helmand and the suicide attacks as well as reoccupation of Kunduz. At the same time the government tried to push through the signing of a peace agreement with Hekmatyar, negotiate with the neighboring states on the issue of refugees in Geneva Conference and consultations to provide financial assistance in the Brussels Conference, in order to provide stability and security in this country.

The most important consequences of the Afghan government’s peace agreement with the Islamic party in the political sphere are: Increase in the legitimacy of the government of national unity, acquiring the confidence of other opposition groups to enter into negotiations, reduce the Taliban’s legitimacy and increase the struggle for power within the structure of the government.

Due to the insignificant role of the Islamic Party in the unrest of Afghanistan it is anticipated that the peace agreement with Hekmatyar’s party wouldn’t bring a considerable and direct impact on the security of Afghanistan.

Convening Geneva Conference and the efforts made by the government to persuade the neighbors to avoid force return of the Afghan refugees is important for Afghanistan because of the lack of needed infrastructures for large-scale acceptance of immigrants does not exist and at the same time the pressure exerted by the European countries for the repatriation of immigrants in the near future would cause the country to face with a new crisis in this area.

If case of a proper oversight on the way of spending the funds allocated in Brussels, would reduce to some extents the crisis of the return of immigrants to Afghanistan but this is dependent on the fight against corruption in the government.

Kunduz occupation and the conflicts in Helmand show that Taliban’s approach has changed from defensive to offensive which in its turn can be the main cause for the increase of the foreign assistance (which has been created due to the increase of regional tensions). On the other hand the betrayal of local governors in collusion with the Taliban shows that the corruption in Afghanistan hast its roots in political and administrative dimensions besides its financial roots.

Existence of traitors in the structure of government and among the regional governors who according to some reports easily provide the ground for the Taliban military to occupy cities, censorship and filtering of regional news for decision-makers, embezzlement and wasting contributions provided to improve the internal situation in Afghanistan; indicate the existence of powerful networks of influence and corruption in this country. 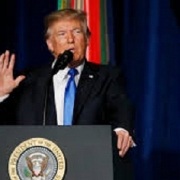 Confronting the ISIS in Mosul as Pretext for Turkish Expansionism

Iran and the EU: Requirements and Strategies
Scroll to top