Blog - Latest News
You are here: Home1 / ُStrategic Notes2 / Iran’s Regional Power Requirements: A look into the Decline or the Consistency o...

The regional power of the Islamic Republic of Iran has been substantially strengthened in the past two decades due to regional political and military developments and trends, but due to the dynamism and fluidity of power, its consistency and durability cannot be guaranteed. The question is how can the Islamic Republic of Iran stabilize its regional power and use it in a proper way?
Hard power, despite all its magnificence and deterrence, is less durable than soft power. Meanwhile, the smart power is far more stable than both hard and soft power. Using hard power leads to its decline but at the same time, utilizing soft and smart power will increase the power itself.
Inclusive power refers to the type of power that enjoys all the political, military, economic, social, cultural, scientific and technological dimensions of power and can be properly combined and used in a precise, timely and appropriate manner.
The misunderstanding of power, its components and factors, along with a reliance on the country’s unlimited power and widespread use of this power, causes a decline in power in the medium and long term. The strategy and prioritization of national goals and interests is a prerequisite for the use of power.
The main foundations of the power of any country are within it, but no country can achieve inclusive and lasting power without taking advantage of international opportunities. There is a tangible relationship between the two levels of internal and external power and they complement and reinforce each other, but the internal power has priority. Governments can survive without power of external origin, but without paying attention to the power based on the internal foundations they will not last.
In the West Asia region, patterns of friendship and hostility are very complex, and power has a lot of fluidity, and power-based politics is the dominant approach of the actors. These conditions have led to militarism, a very tight rivalry between regional powers and the intervention of trans-national powers.
The end of the ISIS’ territorial sovereignty, the intensification of fragile GOVERNMENTS in the region, the persistence of extremism and terrorism in various forms in the regional and global levels, the existence of deep religious and ethnic divisions, and the possibility of their turning into new conflicts, the emergence of a high security margin for the Zionist regime and desensitization of establishing relations with that regime as well as the US profit-based approach towards the region in the Trump administration while shaping the threats, has provided significant opportunities for the Islamic Republic of Iran, which should be used appropriately.
In the last four years, the Islamic Republic of Iran has obtained a better regional position by supporting the central governments of Syria and Iraq as well as supporting the stability in Lebanon. Its regional and trans-regional rivals have been disappointed with the overthrow of Bashar al-Assad’s government after four years of fighting and supporting opposition groups in Syria. Now, it’s time to turn this hard power into an inclusive power.

For the stability of the regional power of the Islamic Republic of Iran, the following ten fundamental principles are necessary:

۴) Paying attention to the arrangements of regional order

۵) Accepting the contribution of other regional and sub-regional actors

۷) Increasing the number of advocates in the world

۹) Paying attention to the principle of convergence of interests

۱۰) Commitments should not exceed achievements. 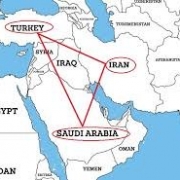