A new strategy developed by the Pentagon ordered by Trump was highly controversial between strategists and Trump’s advisers, and thus was not approved by Trump. The strategy was the source of challenge in two directions: first, increasing the number of forces in Afghanistan or their withdrawal and transferring of security to private security companies, and second, putting pressure on Pakistan or, conversely, cooperating with this country to combat terrorism. That’s why Trump finally announced his final strategy on Monday night August 21.
At the beginning of his presidency, Trump insisted that his strategic priority is to counter “radical Islam terrorism”; it is obvious that the Afghan issue will also be of particular importance in this strategy.
Afghanistan’s war as the longest and most costly war of the US after 16 years has gained existential aspect and become very important for this country in terms of prestige.
The failure of the United States in the war in Afghanistan poses a serious challenge to its military hegemony and has important implications for its political stability.
Given the nature of US relations with India and China and the power struggle among them, the United States needs to be present in Afghanistan to monitor and control the behavior of China and India and to show its continued global dominance.
The strategy announced by Trump about Afghanistan can be summarized in the following points: first, the continuation of the US military presence in Afghanistan; second, the decision to increase and decrease the military forces based on the conditions of the Afghan security situation; third, that the United States commitment to the Afghan government is not of an indefinite nature; fourth, the threatening Pakistan that if this country continues its policy of supporting terrorists, it would be put aside from the US camp; and, fifth, to invite India to play a greater role and contribute to security in Afghanistan and expanding economic cooperation with this country.
Given some considerations including the continuation of military presence and paying attention to Pakistan’s threatening role in Afghanistan, Trump’s new strategy has been welcomed by Afghan authorities.
Paying attention to Pakistan’s role as a part of the problem and India for economic assistance on the one hand is in fact a realistic approach but at the same time, it can pose new threats against the United States and Afghanistan in terms of intensification of regional conflicts as well as raising the possibility of retaliation.
It seems that the announced strategy of Tramp in the current situation, which will prevent the Afghan government from collapsing and its security implications, will be in the interests of Iran. 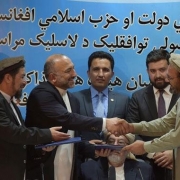 The Paradox of Peace and Insecurity in Afghanistan
0 replies

Escalation of Tensions between the US and Russia
Scroll to top