Blog - Latest News
You are here: Home1 / ُStrategic Notes2 / Regional3 / USA4 / The Middle East Policy of the New US Administration 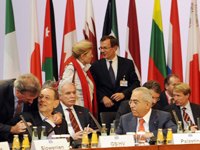 In the present article that is derived from the report of Flynt Leverett, a professor of international affairs at Pennsylvania State University, entitled “the US foreign policy after 2016”, it is argued that the way Trump answers to the question whether the US efforts to establish its superiority in the Middle East is beneficial for the interests of the country or not, determines his approach vis-à-vis the Middle East and the issues like Syria, post JCPOA policies towards Iran as well as engaging with the established US allies such as Israel and Saudi Arabia.
According to Leverett, in spite of the fact that Barack Obama has tried to shift attention and resources from the Middle East to the whole of Asia to create a balance in the US geopolitical strategy, but the Middle East has been a priority of his foreign policy agenda and this region continues to require attention and resources by his successor.
Clinton used to believe in the superiority of the US foreign policy and was committed to continue the pursuit of supremacy in the Middle East.
The possible combination of Clinton’s administration was an indication of this fact that if Clinton became president, his policies in the Middle East could become more interventionist, more militarilized and more consistent with the interests of the traditional allies of the US and her approach towards Iran could be worse that the current situation under Obama’s administration.
While it may seem that Trump would find an alternative to Clinton’s commitment on the superiority of the US in the Middle East, but it is unclear whether Trump as president would be able to included this issue in a logical and coherent policy or not.
The influence of Trump neo-conservatives advisors in his administration and their tendency towards taking reckless reactions in certain circumstances, can lead Trump’s Middle East strategy towards military intervention.
It is less likely that Trump would see the US long-term allies such as Israel and Saudi Arabia as his partners for planning the US power in the region. He is probably more eager to question the seemingly unconditional US security relationship with them.
Instead of removing the Assad from power, Trump would probably give priority to the fight against the ISIS. He supports the intensification of the US military action aimed at removing ISIS, although he has not given any details in this respect.
A part of Trump’s criticism on the JCPOA is about the failure of the Obama administration to use the deal to create business opportunities for US companies in Iran. It is unlikely that Trump wishes to unilaterally withdraw from the JCPOA.
Trump’s self-image as a successful negotiator, may lead him to try to mediate between Israel and the Palestinians but it is unlikely that he forces them towards an agreement in a way that Israel’s strategic options become seriously limited.
During America’s new president, political risk emanating from the Middle East – especially for the Europe and Asia – would certainly grow more acute in several aspects.
Trump’s administration would be less receptive to the potentials of the US allies to influence the US Middle East policy. This also includes the question of requesting European powers to intervene in the region.

Continuity or Change; Implications of Donald Trump’s Victory on the US Foreign...
Scroll to top