During the recent months, some encouraging signs were witnessed on the side of the EU inclination to recognizing a Palestinian State and the Swedish brave action was assumed an important place in this way. In the last weeks, even though some new tensions erupted in the East Jerusalem, a number of the EU authorities including Federica Mogherini, High Representative of the European Union for Foreign Affairs and Security Policy, emphasized on the establishment of a Palestinian State.
According to the Netanyahu government, establishment of a Palestinian State is subject to bilateral negotiations between representatives of Israel and Palestine and their agreement on disputed issues. Borders demarcation, ensuring the security of Israel, the Israeli exploitation of water, the status of Jerusalem, freedom of access to holy places, development of settlements and refugees status are among imperative issues on which Israelis have disputing arguments.
Netanyahu’s government is not ready at all to return to the borders demarcated before the 1967 war, assuming it dangerous to the Israeli security. On some other issues like developing settlements, the position of the Palestinians is contrary to that of the Israelis.
Since the full UN membership of Palestine and its recognition as an independent State requires positive vote of the UN Security Council, the Israeli leaders have successfully attempted to prevent their allies from voting in favor of Palestine. Although no EU member followed the Swedish government in this case, the feeling is that public opinion support for this cause has increased. After passing a non-binding resolution by the UK Parliament, 274 against 12 votes, to recognize the Palestinian State, the same inclination is witnessed in the Netherlands and France.
At the General Assembly meeting to change the status of Palestine to a non- member observer state, fourteen EU member states were in favor: Austria, Belgium, Denmark, Finland, France, Greece, Ireland, Italy, Portugal, Spain, Sweden, Luxembourg, Cyprus and Malta. And Bulgaria, Estonia, Latvia, Lithuania, Slovenia, Romania, Hungary, Poland, Slovakia, the Netherlands, Germany and the UK abstained.
The recent developments in East Jerusalem demonstrate that the project of co-existence between the Muslim and Jewish settlers in the occupied territories, is doomed to fail. Events in the last few weeks indicate that the Palestinians have got a new self-confidence and are taking brave steps against the Zionists. And the European policy is due to the necessity of stopping violence and encouraging the resumption of peace talks 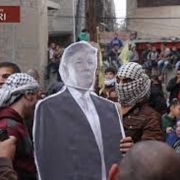 Recent Developments in Ukraine: Implications and Prospect
Scroll to top