The new US National Security Strategy has four main pillars: 1. Protect the homeland, the American people, and the American way of life; 2. Promote American prosperity; 3. Preserve peace through strength; 4. Advance American influence.
Trump’s well-known slogan – “America First” – is the key and fundamental principle of the new US National Security Strategy.
The US National Security Strategy has insisted on “Rebuilding economic strength at home and preserving a fair and reciprocal international economic system will enhance our security and advance prosperity and peace in the world”.
According to this strategy, three main sets challenges to the US national security are as follows: the revisionist powers of China and Russia, the rogue states of Iran and North Korea, and transnational threat organizations, particularly jihadist terrorist groups.
The US National Security Strategy emphasizes the strengthening of military power as one of the most important areas for renewal of capabilities in the country.
The main idea of the forth pillar of this strategy is refraining from the imposition of the US values on others and instead, trying to be inspiring for the people of the world.
Regarding the Middle East, the US National Strategy stresses on “The need for realism towards the region, the fight against the threat of jihadi ideology and the expansion of Iran’s influence, the closure of all ways so that Iran fails to reach nuclear weapons and the neutralization of its destructive activities with the support of US partners, cooperation with co-minded and allied countries, encouraging gradual reforms and economic modernization in these countries, maintaining the necessary military presence in the region to protect the US and its allies against terrorist attacks and also maintaining a proper regional balance of power” .
This strategy is very pragmatic and result-oriented, and it can be felt in its entire clauses. This issue has obviously been expressed in the introduction of this document as follows: “It is a strategy of principled
realism that is guided by outcomes, not ideology.”
The reference to internationalism is severely weak in this document, and on the contrary, its nationalist dimension, which is very selfish and narrow, is highly attended to.
There is no reference to the nuclear deal with Iran or Joint Comprehensive Plan of Action (JCPOA) in the document. This issue is mentioned only in the brief introduction written by Trump at the beginning of this document in which he has repeated his allegations regarding the incompleteness of this agreement. 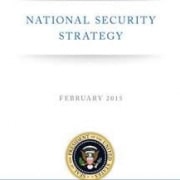 The US 2015 National Security Strategy
0 replies

Iran-Europe Relations: A Separation between the Subjects and the Levels of the...
Scroll to top