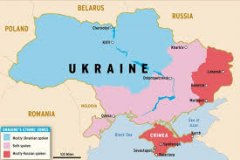 Tensions resumed in Ukraine and the 5 September truce is at the edge of breaching. This crisis caused eruption of tensions between Russia and the West which can create some opportunities for Iran as well.The circumstances give the idea that the next Parliament of Ukraine will pave the way for more Europeanization of the country while it will further drag it away from Russia. However, this is not the end. The Ukrainians are going to have engagement with Russia, even if they don’t like it and try to get away from Russia at the same time. This is because the Russians are not going to let Ukraine be free.
It is unlikely for Donetsk and Luhansk regions to be independent state(s). However, the possibility of following destiny of Abkhazia, South Ossetia and Transnistria in Moldova is more realistic.
Both sides know well that the cost of war is too high and could bring about miserable implications. Therefore, it is unlikely that a full scale war would begin. Yet it doesn’t mean that the conflict is over and probably this fragile situation will go on with a few ups and downs.
The crisis would end when Russia realizes that it cannot prevent Ukraine from coming closer to the West and especially to Europe and on the other hand, the enthusiastic pro-Western Ukrainians –mostly within young generation- come to understand that they cannot ignore the Russian concerns.
Perhaps the pressure of Western sanctions will cause the Russian politicians to modify their demands in relation to Ukraine and on the contrary, Poroshenko would probably make his attempt to find a way to get out of this situation, although given the increasing pressure of nationalist and pro-Western groups in Ukraine, his job could be very much difficult.
From the beginning of 2014, the trade value of Russian Ruble against the US dollar has decreased 30% and this has caused severe problems for the Russian economy. Collapse of Ruble has led to the prevalence of mistrust in the Russian market which in turn has increased capital flight and lessened the inclination to investment.
In case the existing situation in Ukraine persists, it is expected that the West would increase its pressures and sanctions on Russia and in order to cope with those pressures, Russians would try to boost ties with emerging economies and diversify trade routes.
Currently, the most probable ground that can work for Iran in Ukraine crisis is the nuclear talks that Moscow as a permanent member of the Security Council and an influential party to those talks. One of the implications of resumption of tensions in Ukraine is more attention of the West being diverted towards Russia and so adopting a less security oriented approach towards Iran.

The European Union and Establishment of Palestinian State