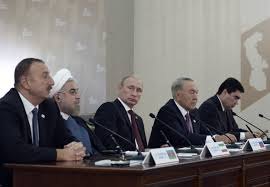 The Military and political officials of the coastal states in the Caspian Sea region usually restrain from making statements about the pace of militarism in the region, however, due to enormous number of resources and its rich potentials, it will be natural if the coastal states allocate a considerable amount of money to increase theirs defense buildup and so be able to secure their national interests in a proper manner.

When the Iranian Damavand navy destroyer joins the Iranian Marine forces at the Caspian Sea, it would change the situation remarkably and in fact given the pace of militarism in the sea, Iran should consider taking serious steps in this regard, as other coastal states have already increased their military presence in the sea.

Given the other coastal states inclination to weaken Russia and Iran’s position in the region, Washington tries to provide other coastal states with needed capital and instruments, so strengthening these countries against the above two. Over all, the different views on legal regime of the Caspian Sea, regional competition and the US–Russia rivalry are the main variables in militarism in the region.

Iran argues for equal division of the Sea so that each coastal state could have its 20% share of it. However, others do not accept it, that is why Iran prevents others to operate and exploit within its 20% adjacent waters, and if Iran could not succeed in realization of this position, the only way to meet this matter of national interest is to engage the ICJ in the case.

The Russians are very much interested in stepping up militarism. In the contemporary history, the Russians had the strongest marine forces in the Caspian Sea and to retain this supremacy was their long term strategy. Therefore, it is foreseeable that they will keep on this position and even will make any efforts to this end.

On the other hand, Azerbaijan assuming Armenia as its main enemy, has purchased weaponry that do not match defeating that country as Armenia neither does have ballistic missiles for curbing which Azerbaijan should have S-300 nor its bombardment can justify Azeri order to buy long range missiles from China.

Currently almost 200 warships are operating in the Caspian Sea, although not so much big, their very presence proves increasing trend of militarism in the region. However, in spite of this growing trend and erupting disputes over ownership of oil and gas resources, a concrete conflict with possible escalation to a real war is not foreseen in near future.

However, the Caspian Sea can be subject to a crisis and although due to interdependency and regional requirements it will not be directed to a massive war but a cold peace will have the rule in this region which does perish the hopes for establishing regional cooperation.

The US 2015 National Security Strategy
Scroll to top