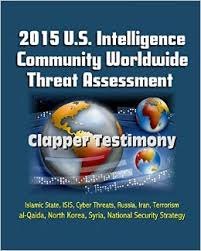 The US ex-president George Bush, founded in 2005 the US Intelligence Community (IC) as a federation of 17 United States government agencies that work separately and together to conduct intelligence activities considered necessary for foreign relations and national security of the United States. This community has a mandate to facilitate exchange of intelligence, coordination through integrated analyses and commanding operation of its agencies. The IC annually provides the Senate Committee of Foreign Relations with a world threat assessment in two public and confidential sections.
In this year’s report, the main threats against the US national security are divided into thematic and geographical ones which are as follows: Cyber, Counterintelligence, Terrorism, Weapons of Mass Destruction and Proliferation, Space and Counterspace, Transnational Organized Crime, Economics and Natural Resources, and Human Security. And the main threats in terms of geography are rooted in the Middle East and North Africa (Iraq, Syria, Islamic State of Iraq and the Levant, Iran, Libya, Yemen, Lebanon and Egypt); Europe (Turkey, Key Partners, Russia and Eurasian Russia, Ukraine, Moldova, Belarus, the Caucasus and Central Asia); East Asia (China and North Korea); South Asia (Afghanistan, Pakistan and India); Sub-Saharan Africa (West Africa, Sudan, South Sudan, Nigeria, Somalia, Lord’s Resistance Army, Central African Republic, and the Sahel) and finally Latin America and the Caribbean (Cuba, Central America, Venezuela and Haiti).
In fact, the report puts cyber threat on top of the list not only because the country faces an ever increasing threat of cyber-attacks, but the scale, sequence, severity and complexity of these attacks are increasing too. Furthermore, the report establishes the threat actors as follows: politically motivated cyber-attacks are now a growing reality, and foreign actors are reconnoitering and developing access to US critical infrastructure systems, which might be quickly exploited for disruption if an adversary’s intent became hostile. In addition, those conducting cyber espionage are targeting US government, military, and commercial networks on a daily basis. These threats come from a range of actors, including: (1) nation states with highly sophisticated cyber programs (such as Russia or China), (2) nations with lesser technical capabilities but possibly more disruptive intent (such as Iran or North Korea), (3) profit-motivated criminals, and (4) ideologically motivated hackers or extremists.
However, when it comes to regional threats, the ISIS stands at the top because it is trying to expand its influence and so destabilizes the Middle East. In fact, the ISIS threat is stronger than Al-Qauide as it has territory and people to rule. In the meantime, while the Syrian crisis has spilled over affecting its neighboring countries, the internal split and competition among the Iraq leaders along with sectarian disputes lead to a weaker Iraq against the ISIS. According to the IC report, the situation in 2014 in Syria was in favor of Bashar Assad and this will go on in 2015 so it will contribute to more confidence of Assad and possibility of winning the civil war by him. In this situation, Iran is promoting its regional influence and through extending different kinds of supports to its regional allies, this country will be able to continue its policies in the year to come.