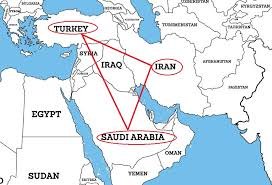 The Increase of the presence and influence of Turkey in the Middle East in various fields is in the competition and challenge with the role of Ira in a way that long-term good neighborly relations between the two governments are overshadowed by it.
Turkish policy is that by 2023, the centenary of the founding of modern Turkey, turkey would be among world’s ten leading economic powers and the world’s energy hub.
Another factor that is an important part of Turkey’s strategic culture is that the security pillars of that country are western-based.
Turkey is trying to play with the displaced persons card in a way to turn it into a security issue of Europe so that the EU feels itself needy to turkey in a way or another.
Secret negotiations between Ankara and Tel Aviv aimed at smoothing the situation and gradual start of relations was made public by Israelis.
Although turkey has maintained friendly relations with Sunni Arab, Turkmen and Kurdish as well as some Shiite factions, It certainly cannot establish a friendly relationship with current Iraq.
Special relationship between Turkey and Kurdish regional government which is based on political and security goals, leads to more disintegration with Baghdad.
It seems that if tensions between Iran and Saudi Arabia would end in a way that Saudi would be a looser, this will negatively impact the regional relations between Iran and Turkey.
The population of Alawites cannot be estimated because religion and ethnicity are not mentioned in the censuses.
Because Alawites in the Ottoman period were severely repressed, they never declare their religion and basically they are from a totally secular and infidel urban class who believe the rise of religiosity in Turkey would be to their detriment.
Alawites are always allied with the most secular trends in turkey and mainly enter a coalition and vote for the “Republican People’s Party”.
Turkey’s geopolitical advantage in connecting West and East Is among the features that turns the “lack enemy” into an element of the strategic culture of that country,
Despite the fact that Turkey tries to prove itself as a regional power, but in no way wants to be defined in Shiite-Sunni block and take the leadership of the Sunnis due to the Arabic character of this trend and that is why Turkey always been emphasizes on the Turkish Islam.
Basically, Turkey is not fit to accept any ideology, although the elites of this society are aware of the concepts and contemporary ideologies, but this society is not susceptible for being ideological.

Iran’s Regional Power Requirements: A look into the Decline or the Consistency of Power
0 replies